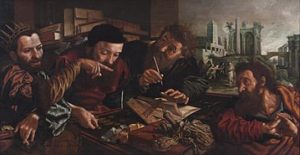 Jesus was a storyteller who painted word pictures to help his listeners imagine themselves in the bigger story of God, which he called “the kingdom of God.” Using our imaginations in this way draws us closer to God and to each other, because it teaches us to put ourselves in other people’s shoes. So during the summer, we’re picturing God’s kingdom through the eyes of many artists. We’ve seen The Mulberry Tree, by Vincent VanGogh, because Jesus says God’s kingdom starts small, but grows very large. Then we pictured grace in the generosity of the boss to his workers with Rembrandt’s Parable of the Laborers in the Vineyard. Two weeks ago we pictured persistence in prayer with a drawing by Eugene Burnand. Today we have The Unmerciful Servant by Jan Sander Van Hemessen. As the king points to a ledger, you can make out someone in the background heading for a dungeon, the consequence of an unforgiving spirit. I’m reading from Matthew, Ch. 18, beginning with vs. 21. Here’s the holy word of God.

Jesus has just been talking to his disciples about how to deal with sin, especially the sins that crop up in relationships. “If another member of the church sins against you,” Jesus says, go and talk to them about it. If you can’t work it out, ask someone to go with you and try again. And if that doesn’t work, tell the church and try again. And if that doesn’t work, then treat the person like a “tax collector or Gentile.” Everyone since then has thought Jesus means you’re allowed to shun or excommunicate the offending person—but that doesn’t really make sense, since Jesus hangs out with tax collectors and sinners and welcomes Gentiles. He appears to mean that no matter what we need to keep reaching out to the people who wrong us. In other words, forgiveness has no expiration date. Peter was talking in class and didn’t hear this. Or maybe he does and can’t believe what he just heard and wants to clarify. “Wait, Lord, so you’re saying we just need to keep forgiving? But isn’t there a limit? When is enough enough?” We figure three strikes and you’re out —so Peter’s offer of seven “second chances” is generous in comparison. Not so fast, Jesus responds. Make that seventy-seven times. Which, of course, is pretty absurd —I’m sorry, you say, but I’ve forgiven you 48 times now. You get 29 more chances and then we’re done! Who keeps track like that?

Just to make sure we get the point, Jesus goes on to say that the kingdom of heaven is like a king who wants to settle accounts with his slaves. Bible scholar Douglas Hare says that Jesus was probably referring to a king with many court officials who were in charge of their own territories and budgets. (Matthew, p. 216) These officials were often referred to as servants or slaves even when they weren’t. So the king is basically doing an audit of all the books. And he discovers a big discrepancy: one of these officials, who must have had a very high level position, has been doing a little creative accounting—we would call it embezzlement—and the sum is huge. Ten thousand talents—my Bible footnote says a talent was worth 15 years of a laborer’s wages. Quick—what’s 10,000 times 15? 150,000 years, right? So maybe this official earns a lot more than a laborer, but the point is taken. When he pleads for mercy, he and the king both know full that he can’t possibly pay back what he owes. The king has every right to recoup something—but selling the man and his family and possessions? Even that won’t begin to repay what he owes. Fortunately, the king is kind. He forgives the debt and lets the man go free.

Has anyone ever done that for you? Have you ever been so indebted to someone that you couldn’t pay them back and they forgave your debt? Have you ever done something hurtful and known you had no right to expect forgiveness—and you were forgiven anyway? What was that like? How did you respond?

In this case, he’s free! What a happy ending to this man’s story! Except it doesn’t end there, does it? Does he go and sin no more? Does he realize the error of his ways and so never “borrows” another penny as long as he lives? Does he sing the praises of the king who stopped counting and saved his life and his wife’s life and his children’s lives? (Can you imagine Citibank or Wells Fargo doing that?) Does he gratefully and cheerfully pay it forward, forgiving as he has been forgiven? A hundred denarii were all he was owed—a couple of months’ worth of wages, that’s it. (And it was probably money he had “borrowed” from the king!) When his colleague promised to pay him back, it was quite likely to happen. And sooner rather than later. But the forgiven man didn’t get it, did he? He doesn’t see how the king stopped counting and closed the books. In fact, it looks like he thinks he played the king for a fool and got away with it—never understanding the loving-kindness, the huge undeserved grace he had actually received. But we know, right?

And you and I know the undeserved grace that we all have actually received. Or I hope we do. All those missteps. All those angry words. All the times we should have and didn’t. All those times we shouldn’t have and did anyway. Every day, day in and day out, our debt getting bigger and bigger and harder, if not impossible, to repay. We can’t possibly pay back what we owe. What a relief to be freed of the burden of all that! What a great and gracious God who says, “Come, let us talk together: though your sins are like scarlet, they shall be like snow.” (Isaiah 1:18a) No fooling. No catch. Just pure grace wrapped around us like a warm blanket on a chilly summer night.

Jesus said many times that the only way to gain your life is to lose it. Robert Farrar Capon says this parable is about living and dying. (Parables of Grace, p.48-50) The king dies to the self that merely keeps accounts. Instead of demanding his due, he forfeits it—he lets go of his own self-interest and offers grace to his debtor. The official, on the other hand, refuses the gift of life. He prefers to remain as he always has been—and stays in his sin of unforgiveness. “The sole difference…between hell and heaven,” Capon says, “is that in heaven forgiveness is accepted and passed along, while in hell it is rejected and blocked…. There is only one unpardonable sin and that is to withhold pardon from others.” (p. 50)

Each week we pray as Jesus taught us, “forgive us our debts as we forgive our debtors.” Here Jesus says, pay it forward: as we are forgiven, so we are to forgive. He’s not telling us to allow and enable abuse—until you’re safe and the abuse is addressed, forgiveness is off the table. But seventy times seven means we are never allowed to stop striving to forgive, so we might as well start making it a habit.  So picture this: just like the king, open up your books, look at your accounts to see what and who needs to be forgiven in your life. Find just one person you need to forgive and take the baby step of simply praying for that person this week, nothing else. And stop counting.