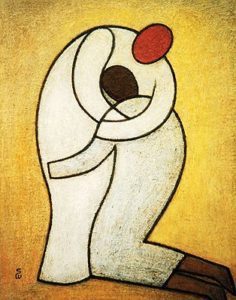 The Prodigal Son Returns The Art of Soichi Watanabe

Jesus’ teaching relied on word pictures to help his listeners imagine themselves in the bigger story of God. By using our imaginations like this we’re able to put ourselves in other people’s shoes—bringing us closer to God and the people around us. So this summer many artists have helped us see that God’s small, but growing kingdom is about grace, persistence in prayer, forgiveness, giving of ourselves, being good neighbors and welcoming everyone who wants to join in. In fact, the angels in heaven are never happier than when we come home. Japanese artist Soichi Watanabe focuses on finding ways of expressing his Christian faith in current day Japan. Using geometric forms, he purposely paints faceless figures so that we the viewers can picture ourselves in the painting, as in The Prodigal Son Returns. Watanabe says that art is his own humble response to God’s work in his life. He paints to praise the Lord. I’m reading from Luke, Ch. 15, beginning with vs. 1. Listen with me to God’s holy word.

Bob McDonnell, Bernie Madoff, Martha Stewart, Michael Cohen, Paul Manafort. Just a few recognizable names in the pantheon of people whose expensive tastes and lavish lifestyles have led to legal trouble. We often joke about winning the lottery and what we would do with the money. But if these folks are any indication, having lots of money isn’t a guarantee of honesty, integrity or even happiness. In fact, it can lead to major temptation, which can lead to illegal activities, which can lead to disgrace, at least, for some, and jail for others. Former Virginia governor Bob McDonnell will likely never hold public office again. Style maven Martha Stewart spent a couple of years in federal prison. Stock broker Bernie Madoff will never walk free again. Manafort’s day in court this week ended in conviction for tax fraud and Cohen also pleaded guilty to tax charges. And these are just the people who grab the major headlines. What about folks who embezzle from local companies, clubs and organizations? We Christians probably shouldn’t be surprised at such greed—it tempts the best of us. You don’t have to drink alcohol to excess to be “drunk”—I’d propose that it’s possible to be drunk on too many houses, too many things, too many people telling us things we want to hear. And like any addiction, it’s all about trying to fill an emptiness that just refuses to be filled.

Tax collectors and sinners. Jesus has a way of winding up with such people—doesn’t he? The tax collectors often had great wealth—mostly made by skimming money off the top. They could afford the best of everything—the best homes, the best china, you name it. But the best people often steered clear of having anything to do with them. In that way they were no better than the other so-called “sinners” of their time. “In those days,” Barbara Brown Taylor says, “sinners fell into five basic categories: people who did dirty things for a living (such as pig farmers and tax collectors), people who did immoral things (such as liars and adulterers), people who did not keep the law up to the standards of the religious authorities (such as you and me), Samaritans and gentiles.” (Christian Century, March 11, 1998, p. 257)  And once you were branded an outcast, you rarely got another chance to be part of polite, religious society.

The way Jesus associates with these so-called sinners is what the Pharisees and scribes are complaining about when he tells them this story. It’s the last of three about a lost sheep, a lost coin and finally a lost son. We usually hear these stories as telling us about ourselves—I actually can’t read this chapter of Luke without a lump in my throat, it feels so personal. Who among us hasn’t had the experience of being, or at least feeling, lost? We may not be literally addicted, we may not have been convicted of a federal crime, but there’s an empty, lost place in each of us that refuses to be filled—and no matter how active we are, how social we are, how successful we are, deep down we’re afraid that no one will come looking for us—no one will be glad when we come home—no one will give us another chance.

We read these stories as telling us about ourselves, because we know how it feels to be the prodigal—far from home, far from the love we yearn for, far from the person we know deep down inside God wants us to be. And the worst part is when we’re stuck. We’ve wandered down a crooked path, following our noses, trying to find what we’re looking for and have ended up at dead end after dead end. Just when we think we’ve found our way back, instead of taking us in the right direction, each twist and turn ironically takes us farther away from all that we long for. The Pharisees and scribes are no better off, no closer to home, than the tax collectors and sinners—the only difference is they don’t know it.

We usually read these stories as telling us about ourselves, but where is the comfort in that? Where is heaven’s joy? We already know the bad news—so not only do they tell us about ourselves, they tell us, even more importantly, about Jesus. He tells us who he is—the one who welcomes tax collectors, sinners and prodigals—unlovely us—and sits down and eats and talks and laughs and accepts and forgives. Jesus, who goes out of his way to find the one person among 100 who can’t see the path in front of her eyes. Jesus, who can’t let anyone, much less a coin, stay lost. Jesus who, like the father in this story, every day goes and stands at the end of the driveway like a beacon, the light that will bring us sooner or later to our senses, sooner or later to our feet, sooner or later to make the journey back, sooner or later to be enfolded in the embrace of forgiveness and return. Sooner or later home to the warmth of heaven’s joy.

What would any of us do without the steadfast love and forgiveness embodied in Jesus? What would any of us do if left with our own limited mercy? What would become of us if we were left with emptiness that has no hope of being filled? What would happen to us if Jesus weren’t on the road with us and also waiting at home for us? Before we ever get to the prodigal who can’t see anything but himself, the love of Jesus waits for us, struggles with us, picks us up, reconciles us, plans a party for us, puts what was broken back together and reminds us we have been made for God and for each other. And leads us to heaven’s joy. What would we do without him?

Make no mistake—in the eyes of the Pharisees the Prodigal Son was an irredeemable sinner. Like Madoff and the others, he took what didn’t rightfully belong to him and, worse, wasted it on expensive living. His actions had cones-quences. But he finally came to his senses and admitted to himself and his father his wrongdoing. Ever wonder what happens next in this story? After the home-coming hug, after the party? Picture this: Like the prodigal, it’s you on the road. Jesus, arms open, is waiting for you—and as you kneel at his feet, before you can say anything, he says the words of assurance we’ve heard so often: “If anyone is in Christ, there is new creation, the old is finished and gone, everything is made fresh and new.” And he says, “I know what you need. Trust that I am sufficient, now and always.” And then you hear angels cheering and the party starting in heaven.