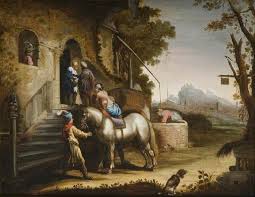 When Jesus taught he painted word pictures so his listeners could imagine themselves in the bigger story of God. Using our imaginations like this draws us closer to God and to each other by teaching us to put ourselves in other people’s shoes. So this summer, we’re picturing God’s kingdom through the eyes of many artists. The Mulberry Tree, by Vincent VanGogh shows us that God’s kingdom starts small, but grows very large. We picture grace in the generosity of the boss to his workers with Rembrandt’s Parable of the Laborers in the Vineyard. We see persistence in prayer with a drawing by Eugene Burnand. And we see forgiveness with The Unmerciful Servant by Jan Sander Van Hemessen and giving of ourselves in St. Francis Receiving the Stigmata by Giotto di Bondone. This week, as we “see” our neighbors in The Good Samaritan by Rembrandt, Jesus shows us how to be a neighbor. I’m reading from Luke, Ch. 10, beginning with vs. 25. Listen with me to God’s holy word.

Jesus and his disciples are on the road to Jerusalem. This isn’t just any road trip—they aren’t on vacation like most of us have been or will be this summer. Up till this point, Jesus’ ministry has been focused in and around Galilee. Like any rabbi or teacher of the time, Jesus has a group of students traveling with him as they go from village to village teaching, preaching, and healing. His reputation has grown along with the crowds who come to hear him and everything appears to be going well. But one day Jesus tells his disciples he’s heading south to Jerusalem. We know this story, so we know from that time on his ministry in Galilee is over and Jesus is focused on completing what God has asked him to do. And because we know this story, we know Jesus tells the disciples that once they get to Jerusalem he’ll be arrested and tried as a criminal and executed. And on the third day raised from the dead. “Let these words sink into your ears,” he says to them. “The Son of Man is going to be betrayed into human hands.” They didn’t understand but they continued to trust him and to travel with him on the road. To get to Jerusalem, Jesus and the others could go the long way around or they could walk as the crow flies through Samaria. We’ve heard of Samaritans—even though they and the Jews were literal neighbors who lived side by side, they were sworn enemies who treated each other like dirt. To be a Samaritan, in the eyes of the disciples and other Jews, isn’t a good thing because nothing good can come out of Samaria—or so they think.

So Jesus and the disciples are on their way to Jerusalem and Jesus is teaching about God’s kingdom when a lawyer—meaning someone who studies and interprets Jewish religious law—stands up to question him. Is he one of Jesus’ growing list of enemies—or does he just want to know if Jesus is worth listening to? Luke doesn’t say. The lawyer asks Jesus about eternal life—how do I get some of that for myself? Like all great teachers, Jesus turns the question back on the lawyer. “You know the law—what do you think?” Easy peasy: love God, love neighbor, that’s all there is to eternal life. The lawyer passes his own test! Congratulations, Jesus says. Do this and you will live. But the lawyer’s not done yet. So which neighbor is that? he asks. Apparently, like many of us, he wants to complicate what’s perfectly clear and simple. Maybe “all” your heart, soul and mind doesn’t really mean “all”? Maybe loving other people doesn’t actually mean “all” other people? Maybe neighbor means just people on my street? Or right next door to me? My neighbors Jamie and Mike, for example, are pretty easy when we’re talking about “loving your neighbor as yourself.” We have some obvious things in common: they’re white, college-educated, Christian, like to garden. They’re very nice so I’m nice back to them, but we mostly don’t need much from each other. Is that the kind of neighbor the lawyer has in mind when he asks his probably not-so-innocent follow-up question?

In the picture he creates, Jesus sure doesn’t go easy on him—or us, either. As much as we might like him to, Jesus doesn’t spin this story to let that lawyer or anyone else off the hook. He’s not taking the easy road to Jerusalem and he doesn’t let us think we can take an easy road to eternal life, which begins now. Don’t like a particular ethnic group? That’s your neighbor. Down on immigrants from Mexico? That’s your neighbor. How about that co-worker or fellow student who’s a different color? That’s your neighbor. Cheering for the Thai soccer team members who’ve been rescued but think it’s okay to put other kids in cages? One can’t be our neighbor while the other isn’t. We say we love God? We say we love our neighbor? Are we sure about that?

As much as I’d like to picture myself as the Good Samaritan in this story, Jesus doesn’t let me off the hook either. Reading this parable again, I have to confess the times I’ve walked by on the other side of the road when someone needed me to be a neighbor. How many times I’ve grudgingly given a little when the situation called for a lot. How many times I’ve patted myself on the back and thought I’d met my quota for the week or the month or the year and could skip the next person. Or thought that only people who are nice or who agree with me are the ones I get to call neighbor. Jesus holds up the mirror to the lawyer who wanted to justify himself and more often than I should be, I’m standing right there next to him, hoping Jesus doesn’t really mean what he’s saying.

I also know that when Jesus tells this story about what it means to love your neighbor, it’s not about just being nice and it’s not about being good. It’s about giving and receiving mercy, even when it means sacrificing our privilege and entitlement and convenience—or our egos or sense of security. Because all of us have received mercy—as independent and self-sufficient as we like to believe we are, you and I are vulnerable like everyone else. We really don’t know what will happen from one minute to the next—and none of us lives this life without help. Sometimes help from people we don’t know and don’t even trust. Which neighbor again? Anyone who isn’t me. Jesus says our neighbor is the other person here, right now—especially anyone who needs us. And surprise! Our neighbor is the other person here, right now, who may be more than willing to help us when we ourselves are in need. So picture this: you’re listening to a news show or reading a post on Facebook that talks about a person or group of people that you don’t usually think of in a positive way. Maybe you’ve heard other people wonder if they’re even human? Jesus is sitting next to you and you point at the screen and ask, “So is this my neighbor?” And, like the good teacher he is, he replies, “What do you think?” And to be sure you get the answer right, he tells you the Parable of the Good Samaritan.