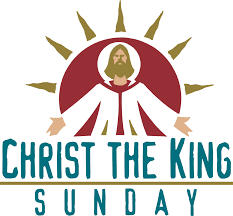 THE REAL KING STANDS UP

Today is Christ the King Sunday. Advent begins next week, during which, along with our Christmas shopping and decorating, we prepare for the coming of Christ into the world. Jesus showed us the difference between God’s power and human power. While we think of presidents and prime ministers, the people of Jesus’ time defined ultimate earthly power and authority in terms of kings and emperors. So Jesus spoke of the coming of God’s kingdom. The kingdom of God is a great banquet, the kingdom of God is where lost things and lost people are found—and where the first are last and the last are first. Over time, early Christians came to understand that through the life and death and resurrection of Jesus Christ the kingdom of God is already restored with Christ himself our anointed king. In our Gospel lesson this morning, Jesus stands before Pilate, who sees the world in terms of political reality. God’s reality is something quite different. I’m reading from John, Ch. 18, beginning with vs. 33.  Listen with me to God’s holy word.

Jesus stands before Pilate. It’s a grim scene—a powerful political leader facing off with a powerless itinerant preacher accused of blasphemy and treason. Pilate was a minor Roman official well-known for arrogance and cruelty to the people he governed. He has no problem condemning criminals to death by crucifixion and yet with Jesus it appears to be a different story. Jesus already had appeared before the high priest, and the religious authorities have now brought him to Pilate, who understandably asks them what the charge is. They answer evasively—“if he weren’t a criminal, would we have handed him over to you?” Pilate, who normally considers these people to be backward and unsophisticated, smells a rat. If they won’t tell him the truth, then maybe this Jesus will.

So Jesus stands before Pilate. One a powerful political leader and the other a powerless itinerant preacher. Pilate represents Ancient Rome, one of the greatest empires ever. Known for bringing order out of chaos, the Romans were fantastic engineers who built roads and aqueducts, some of which still exist 2000 years later. They were known for art, sculpture and literature, and laws which offered the world a unique perspective on justice. For 200 years, the Pax Romana guaranteed peace and safety to travelers within the empire, and, as cultures go, Rome offered an abundance of life and prosperity to its many citizens. It doesn’t get much better than that—or does it?

Jesus stands before Pilate, the powerless before the powerful. Pilate’s question, “Are you the king of the Jews?” is sarcastic. Pilate knows Herod Antipas, the Jewish ruler of Galilee, whom the Romans tolerate and manipulate to keep the ordinary people in line. Pilate may also know that Herod Antipas’ father, Herod the Great, was called king of the Jews—a title given to him because he was so helpful to the Romans. As Jesus stands before Pilate, the only way someone could be king in Israel is if the Roman Emperor crowned him. And this Jesus lacks such a crown, which is reassuring to Pilate, who only cares about threats to his own power.

Jesus stands before Pilate. The powerful and the powerless in a scene repeated through the ages—the peasant and the feudal lord, the slave and the slaveowner, the oligarch and the worker, the tyrant and masses. Jesus the powerless one stands before Pilate the powerful one. Or does he? Look again at this scene—does Jesus stand before Pilate or does Pilate stand before Jesus? Jesus stands before Pilate—or vice versa—and we’re confronted with two different interpretations of power and authority, human and divine, and asked to decide where the truth lies. During the 20th century and now into the 21st, we’ve experienced some of the best and the worst of the human kind of power. The battle for political power we’ve witnessed this year, if nothing else, should give us pause for thought! The single-minded quest for human power has led to world war, to holocaust, to genocide on a grand scale. If nothing else, it means that the powerless have suffered, while the powerful serve their own interests.

Divine power, divine authority—now that’s something else again. While we Americans give our allegiance to human leaders, we understand the need for the right and just and fair use of power and authority. We’ve seen in recent years many abuses of power and authority—and many of us at this point don’t trust even our duly elected leaders. But Jesus Christ isn’t like most of the authority figures we’ve known. In fact, he’s just the opposite. The truth to which he testifies is not the self-serving truth of US politicians because Jesus came not to be served, but to serve. He came not to accumulate power for his own glory, but to use that power on behalf of the powerless. The kingdom he offers us is one where the lion and the lamb live together in harmony, and justice and righteousness roll down like mighty waters, a land of milk and honey, where no one goes hungry—spiritually or physically. And he doesn’t force us or coerce us—he invites us, as the Apostle Paul says elsewhere, “to share in the inheritance of the saints in light,” so that we will never hunger and thirst, but have “redemption, the forgiveness of sins.” Jesus claims us as his own—those who listen to his voice hear and then experience the truth of love and forgiveness. Love that bears all things and forgiveness that forgives 70 times 70 times.

So Pilate stands before Jesus and it’s clear no mere human leader will ever be good enough or pure enough. After many corrupt kings in Israel, the Romans moved in and set up shop, putting their own governors in charge. Still the people longed for the kind of king that David was to them. When the people of Israel thought of royalty, they thought “David.” When we think of royalty, we think “Elizabeth—or William or Harry.” God, however, thinks “Jesus.” A different kind of king. Born in a stable, trained as a carpenter, worked as a preacher, teacher and healer, then crucified, dead, buried, raised from the dead. Exalted. Sitting on the right hand of God—the King of Kings not because of his wealth or glamour but because he willingly served God and served people even unto death. His power is love, his wealth is kindness and mercy, his responsibility is compassion and forgiveness.

We’re no longer ruled by human kings and queens, and Pilate is long gone, but we’re ruled anyway—by all the things we think we need, by the past we cling to, by addictions that chain us, by fears that keep us awake at night, by television and junk food and internet shopping—and anything else that can keep us from the abundance of life God wants for us. Despite campaign promises, no human or human-made ruler can give us what we really need. The one who gave up a literal crown for the chance of serving the world offers us love, truth, peace, grace, forgiveness, freedom from fear—all of the things that give our lives meaning and purpose. In this election year we’ve been asked to support many candidates, but the truth is there’s only one leader worthy of our allegiance—the One who stands up to Pilate and all he represents. His name is Jesus.