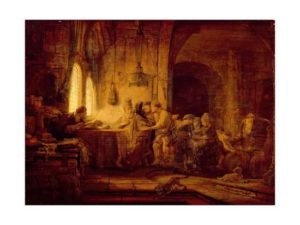 “Parable of the Laborers in the Vineyard” – Rembrandt

When Jesus told stories—or parables—he painted word pictures to help his listeners “see” what he was talking about and inviting them to imagine themselves in the bigger story of God, which he often called “the kingdom of God.” During the summer, we’re doing what those original listeners did—picturing God’s kingdom through the eyes of many artists. Last week The Mulberry Tree, by Vincent VanGogh, helped us see God’s kingdom as something that starts small, but grows very large and inclusive. This week we’re picturing grace with Rembrandt’s Parable of the Labourers in the Vineyard, which he painted in 1637. It shows the workers as they bring their complaint to the boss, who looks to be sitting in a spotlight. Notice one hand is over his heart, while the other is open to show he’s giving and generous. In our reading from Matthew, Jesus and the disciples are on their way to Jerusalem when a rich young man asks, “What good deed must I do to have eternal life?” Jesus tells him to sell everything he has and give the money to the poor. Then Jesus talks about the relationship between faith and money, and Peter responds: “Look, we disciples have left everything and followed you. What reward will we have?” Here’s what Jesus says, from Matthew, Ch. 20, beginning with vs. 1.

So a vineyard owner has a problem. His grapes are ripe and it’s an exceptional harvest. He needs more workers than usual and he knows just where to find them—at the local co-op. And sure enough, there they are, at 6 a.m., ready to work. They negotiate the going rate—enough money for food for the day for each one and his family—and then get in the truck and go off to pick grapes. There’s no indication this is a problem, they’re hard workers and the wage is fair. But soon the owner, listening to The Weather Channel, hears frost is expected and the workers he hired aren’t enough to get the job done—so he trucks on back to the co-op and hires more workers. And so the day goes, everyone working hard but not quite able to get the job done before nightfall—so more and more workers are needed and hired. Fortun-ately for the owner, even at the 11th hour—literally 5 p.m. of a 12-hour workday that ends at 6—he finds workers still unemployed. Not because of laziness—we know they’re more than ready to work because even at that late hour they haven’t given up and gone home. So these workers are happy, the owner is happy, the grapes are happy. End of story. Well, almost. As Robert Farrar Capon retells it, the happy owner is so happy because of how well things have gone that day, he decides to do something crazy and extravagant. Beginning with the workers who were hired last and so worked least, he starts paying them all the day’s going rate. Everyone will benefit from this bountiful crop! Everyone will have enough to eat that day! The owner is still happy, the grapes are still happy—and the workers—well….

When Jesus tells this story to his disciples, it hits home. Most of us know what it’s like to look for work and not be able to find it. Most of us know what it’s like to work all day and come home dead tired and feel taken for granted. Most of us know what it’s like to have a job where we’re overworked and underpaid—where our efforts may go unnoticed and unrewarded. And most of us don’t want to hear Jesus say that the ones who were last hired got the same pay as the ones who worked hard all day—that they were actually treated all the same! A workday in the ancient world was from sunup to sundown—from 6 a.m. to 6 p.m. These laborers had been on the job a full 12 hours—which isn’t all that rare in our own economy. In a free market, capitalist system, we want to know that in the end, those who pull at least their fair share—preferably more—will get paid vacation, health insurance, merit increases and big fat bonuses. Come on, fair is fair? Right?

Now, of course, Jesus’ point is bigger than how much people should be paid. He isn’t talking about work per se—he’s not making a case for the merits or evils of capitalism. He’s not even really talking about the workers and what they should or shouldn’t receive. If anything, given all Jesus says on the subject of making a living, he’s in favor of everyone having what they need to live—and that it will come, not from our own efforts but from the hand of God. Isn’t that just like Jesus—to take how we’re used to looking at things and turn it upside down? It’s just like him to pull our attention away from ourselves and back to God. He’s always saying things like, “consider the lilies of the field, see how they wouldn’t even think of getting up and going to work at 6 a.m. at a job they can’t stand just because it pays big money —and yet even the richest king in the world doesn’t have a better wardrobe!” And he says, “don’t spend your time socking away stuff here on earth—it’ll just rust or get stolen. A hurricane will blow it all away! A volcano will dump ash on it! Your real treasure is your spiritual life—your relationship with God. It won’t rust, no one can steal it, wind can’t knock it down. You can’t even see it—but it’s all that counts.”

According to Jesus, life is all about God and our relationship with God and what do you do with that? Do we really want to worship a God who’s generous to a fault and expects us to be, too? Who forgives people who don’t deserve forgiveness and expects us to do that, too? Who gives second and third and fiftieth chances to life’s losers? Who expects us to focus not on the church budget—but on caring for our neighbors and welcoming people who have different ideas than we do, no matter what it costs? We understand the complaints of the workers better than the actions of the owner and Jesus is giving us more than a clue about who God is and what living God’s way is like. Jesus is challenging us to redefine what’s fair and to remember that, if nothing else, God’s hands are always, always, always open. And so should ours be. Because if our hands are open, our hearts also are likely to be open. And if our hearts are open, well, then, just about anything is possible.

The truth is it costs God a lot more to be generous and open and caring and kind and forgiving than it does us. This parable says the workers all got the same wage—no one was denied, cheated or given less than promised. In fact, the only one who’s worse off is the owner, who digs a little deeper into his pockets to pay every-one the same. The pay is based not on the merits of the workers but on the com-passion of the owner who sees and responds to their deepest needs. Christ lived and died for everyone—the cost to God was enormous and yet a price God was more than willing to pay for opening the door between heaven and earth. Cutting us a break is the definition of grace—and it’s available to everyone.

If we’re really honest with ourselves, we all think we’re entitled to certain things in life. That we’ve earned our rank and our privileges. And that sense of entitlement can lead to resentment toward people who haven’t “paid their dues.” I was here first, we’re likely to think, so I deserve more respect or more power or more say. But in God’s way of doing things, those who are first still need to learn some-thing. And those who are last have something important to offer. In God’s way of doing things, rank doesn’t have its privileges—and therefore, we need to be very careful about how we define what’s fair and what isn’t. We may not want to hear it—but in God’s way of doing things, it all equals out in the end. God is generous to all. Merit pay may be how our economy works—but in the life God wants for us, a full measure of grace can’t get any fuller. The owner in the parable knows what’s needed and so do we—“give us this day our daily bread.” Maybe it’s better to work for one who is generous than one who plays favorites? And if God wants to be that generous, even with us, who are we to say otherwise? So picture this: God, hand over heart, offers you, right here, right now, what you need for this day and every day. And in the kingdom of God, “you” means everyone.